Highly sensitive persons (HSP's) have heightened sensitivity to their environments. If you're a highly sensitive person, your nervous system literally picks up more information than the average person about what's going on around you. As HSP's receive heightened sensory input, you can easily get overloaded by too much stimulation. HSP's can also be more sensitive on other levels. For example, you may be more sensitive to environmental pollution and toxins.

As an HSP, it is important to become aware of your situation so you can learn to manage it. In this fast-paced world of over-stimulation, you need to learn to make choices that are healthy for you, even if others might not understand or relate. 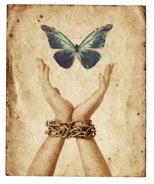 People with extra sensory perception receive information beyond the normal 5 senses. For example, rather than just feeling when things touch their skin, they may at times feel others' emotions. Instead of just seeing with their physical eyes, they may at times see things like spiritual energy and auras. They may also be able to hear psychic communication that cannot be heard by the physical ear.

Highly Sensitive Persons with Undeveloped Abilities
In our modern scientific and materialistic culture, we are not taught about psychic abilities. In general, we are ignorant about these phenomena. As a result, many people have some psychic ability but don't even realize it. You too may have an aptitude, but shut it down because you don't know how to process the information...

If you were to begin to be aware of something extra sensory, you would probably not even allow yourself to register the information. If you did allow the information to enter your consciousness, you would probably then--like most people--question your sanity. When you habitually invalidate or turn off a part of yourself like this, it eventually just shuts down. It's not gone forever. But it goes dormant and remains undeveloped.

Highly Sensitive Persons and Different Ways of Being Psychic
There are also many misconceptions about psychic abilities. We tend to think of psychics only as people who foresee the future. Reading probable futures is only one type of psychic ability. Being aware of energy...being intuitive, seeing auras, feeling others' emotions, communicating with spiritual beings, or even some types of dream interpretation...can all be examples of psychic ability. There's a lot more to being psychic than fortune telling.

Another misconception is that you're either psychic, or you're not. Psychic aptitudes are much like other aptitudes. Take for example a musical aptitude...if you have an aptitude for music but never had any musical training...you wouldn't really know what your abilities are. You wouldn't know if you were more suited to singing or song-writing, nor which instrument would suit you best. Your raw potential would be there, it just hasn't had the chance to develop. The same is true of psychic aptitudes and abilities. If you never had any psychic training, you wouldn't really know what you're capable of, nor what your strengths are.

Connection between Highly Sensitive Persons and Psychic Sensitivity...
Physical and psychic sensitivity often go hand in hand, or overlap to some degree. As a sensitive, it is useful to know that psychic energy can cause any number of physical symptoms including fatigue, headaches, back problems, stomach issues, and even serious long term diseases. Expressions like, "he's being a pain in the back", "she's toxic" and "you're giving me a headache" reflect our intuitive understanding that there is a connection between psychic energy and physical symptoms.

As a sensitive, if you get other people's energy coming into your system, it can cause all kinds of problems. You may feel intensely emotional, but with emotions that are not yours. You may feel fatigued by others without knowing why. You may get overloaded in public places because you're picking up too much psychic energy and it's simply overwhelming. If psychic energies are causing you problems and you don't realize it, you won't know how to respond effectively to best manage the situation. Constantly being affected by psychic energies and not realizing it can lead to repeated confusion, invalidation, poor health and worse.

As a sensitive or psychic, it is important to become aware of your unique situation, so you can learn to manage it effectively. When you have a deeper sense of who you really are and your abilities, then you can learn to make choices which are healing for you, even if others might not understand or relate. Rather than feeling like you have a strange problem or there's something wrong with you, you can begin to realize you are differently-abled. Opening to your psychic aptitudes, you can appreciate your high level of sensitivity as a gift that is waiting to be unwrapped...
______

As an HSP, you may be interested in anAuras Expert Psychic Reading.

Find out more about creating healthy boundaries on other pages which compliment Highly Sensitive Persons.Or visit other pages on this website...