Aura Shapes
How Are You Responding to Life? 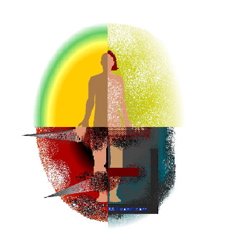 How you respond to life's experiences affects the shape of your aura. Aura shapes include the fuzzy aura, the aura wall, the spiky aura, and the clear neutral aura. A person will generally tend toward one of these shapes in particular.

At the same time, depending on what's happening in life, your aura stance can change. For example, someone who normally has a fuzzy aura could change to a spiky aura stance if they were feeling threatened. While other aura stances are possible, the artistic representations below display the four more common ones... 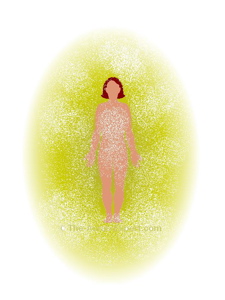 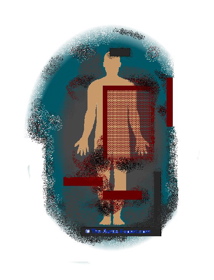 The Aura Wall
A defensive attempt to define personal boundaries. Putting up psychic walls and blocking out others to feel safe. Tendency to assert your will through resistance and judgement.

One of the best ways to find out about your aura shape and how your energy responds to life is through a clairvoyant reading.

You can also gain insights and release blocks through aura healing. An excellent practice to support you in developing a healthy neutral stance is aura meditation.

Find out about aura colors meaning, hidden emotions, kundalini energy and channeling in other pages which compliment Aura Shapes. Or visit other pages on this website...